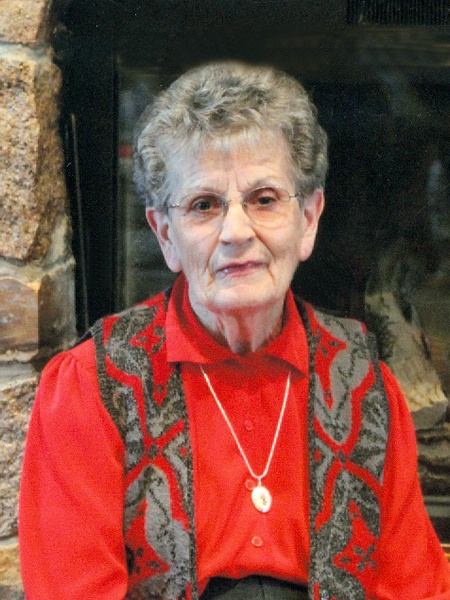 Phyllis Eleanor Emery, 87, Breckenridge, MN, passed away Wednesday, December 27 at Twin Town Villa, Breckenridge, under the care of CHI Hospice.  Visitation will be Friday, December 29 from 5 pm - 7 pm with a prayer service at 7 pm at Vertin-Munson Funeral Home, Wahpeton, ND.  A funeral service will be held Saturday, December 30, at 11:00 am with visitation one hour prior at United Church of Christ (Congregational), Wahpeton, with Rev. Ken Adams officiating. Burial will be at Fairview Memorial Gardens at a later date.  Arrangements are entrusted to Vertin-Munson Funeral Home, Wahpeton.

Phyllis was born April 26, 1930 in LaMars Township, near Fairmount, ND, the daughter of Niles and Alice (Voss) Walter. She attended rural school at LaMars No. 1 and graduated from Fairmount High School in 1947. Phyllis attended Valley City State Teachers College where she obtained her teaching certificate. She taught in Page/Hope ND. Phyllis was united in marriage to Clyde E. Emery on June 10, 1951 at Fairmount United Methodist Church. The couple lived in Wahpeton and Phyllis continued teaching in Mooreton, ND. She worked at Montgomery Ward in Wahpeton before she started her 41 years as clerk in Treasurer’s Office at Richland County Court House. In 1953 the Emerys purchased the greenhouse from Karl Osen which they operated as Emery Greenhouse until selling it to their daughter and son-in-law, Steve and Penny Helgeson in 1980. Clyde passed away on May 23, 1980 and Phyllis continued to live in Wahpeton until moving to Twin Town Villa in Breckenridge in 2009.

Phyllis was a long time member of the United Church of Christ (Congregational) in Wahpeton, where she was Clerk, took care of the flowers, a member of Centerpiece Circle, etc. She enjoyed gardening, camping with her family, sewing, quilting and crocheting.  After Clyde passed, she enjoyed traveling and bicycling with friends.  Phyllis was a member of the American Legion Auxiliary.

She was preceded in death by her parents, her husband Clyde, and her grandson, Phillip Emery Neppl and her son-in-law, Randy Neppl. Phyllis's Memorial Folder
To order memorial trees or send flowers to the family in memory of Phyllis Emery, please visit our flower store.