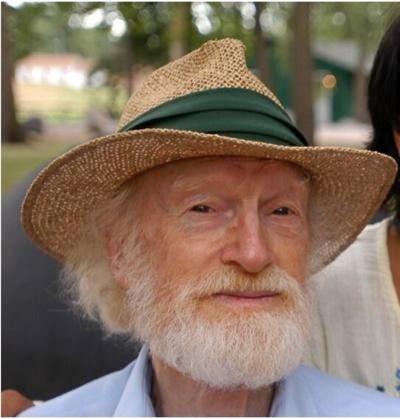 Ralph Erdrich was a familiar figure around town for decades riding his bicycle, playing tennis or skating in the park, and shooting hoops at the Community Center daily into his 90s. A local man recalled, "When I was young growing up, he was always ready to play the neighborhood kids in a basketball game. He didn’t take it easy on us either. His comb over hair would all be hanging off one side. He didn’t care, he was ballin’. I’ll always remember him riding his bicycle, a big smile, white pup in tow, and a conversation in his pocket if you had the time."

Ralph and his brothers grew up in Minnesota. Their mother died when Ralph was 10. Their father’s business had been destroyed by fire. Grandparents in Germany planned to keep the boys while their father worked to re-establish his trade as a Metzgermeister (master butcher and sausage maker). At Chicago, a U.S. Customs official advised, “Don’t send them. There is going to be a war.” Luckily, Ralph’s father married a devoted friend of the family who became Ralph’s second mother. His grandparents were among 17,600 civilians killed by the aerial fire-bombing of their town by Allied forces in WWII.

At age 95, Ralph stated, “I have been lucky, many times.” His earliest job was bottle and floor detail for a local bootlegger in the Prohibition era. At age 17, Ralph went to Whitehorse, Yukon Territory to work on construction of the Al-Can highway. Passing another truck on a steep grade he heard someone holler “Red Erdrich!” It was the man from his hometown who had advised the flame-haired youth to go north, and who was killed on the job shortly afterward. With his wages and camp poker winnings, Ralph bought a farm for his parents. There, he planted a pine forest and helped construct a home, slaughterhouse, butcher shop, and grocery building. In the early 1950s the front wall of the store featured a giant whiteface Hereford steer head portrait painted by Ralph’s artistic wife, captioned “Our Only Dissatisfied Customer.”

But first, Ralph enlisted in the U.S. Army Air Corps and served in WWII as did his brothers in the Navy. Ralph only talked about WWII like a history teacher, except for a few personal vignettes seeded with humor. He was a radar man on B-29s and then on a troop ship carrying over 2,000 unarmed personnel home at the end of the war. His quick actions prevented the ship from grounding in the Strait of Malacca, Indonesia. The area was a known hazard for international pirates taking advantage of the draw-down. When his ship docked in San Francisco, he was informed of the death of his older brother, a pilot and flight instructor. Ralph always considered him a true genius and hero of his life.

Following WWII, Ralph enrolled at St. Cloud University, also known as “Greystone College” since veterans on the G.I. Bill were housed at barracks on the state penitentiary grounds. He earned a bachelor’s degree and also studied law but decided his calling was a teacher. His signed up with Bureau of Indian Affairs, envisioning the skiing possibilities at Turtle Mountain. His first teaching job was at Belcourt, North Dakota, high school in 1951. Other duties were basketball coach, safety officer, bus driver, and occasional deputy to the Chief of Police who was the only officer then. Ralph made lifelong friends with Turtle Mountain people including one extra-special mademoiselle who went to the State School of Science and worked at Wahpeton Indian School (WIS). The couple were married at St. Ann’s church in Belcourt in 1953 and Ralph transferred to Wahpeton. Ralph had an antique harmonica and a zither, but taught himself to play piano so he could serenade his wife.

At WIS he taught 6th grade then 8th grade Special and Social Studies for most of his career. He was a basketball coach and referee, Scoutmaster, student government advisor, summer school and recreation leader, and memorable master of ceremonies at events such as the annual Halloween party. He often took his students skating, sledding and skiing. One former student and Boy Scout, a highly successful entrepreneur, returned after 40 years to give a graduation speech. Pointing out “Mr. Erdrich, the Greatest Man Who Ever Lived!” he said he was motivated on Old Smoky Hill at Fergus Falls, Minnesota “to become a rich ski bum!” Mr. Erdrich afterwards presented him with his Boy Scout ski badge.

Ralph retired from WIS in 1983. For the next 20 years he was known as “Super Sub” working every week as a substitute teacher at Wahpeton High School and Vo-Tech, and sometimes St. John’s School. A former student student wrote in the Wa-Hi newspaper, “I’m sure that most of you can identify with this scene: you hear that your English (or physics, or chemistry, or P.O.D., or World history, or geometry) teacher is absent. You see him at the desk. Frail-looking, well-dressed, older gentleman. You’ve seen him before – maybe playing tennis down at the park, maybe riding bike. And you realize that, even though your teacher isn’t there, this isn’t going to be a sluff day — he knows what he’s talking about!” In his retirement, Ralph was involved in civic work such as Leach Public Library Board, the Bagg Farm history project, and local scholarships fund.

He served in the National Guard for 30 years, retiring as a Master Sergeant. He was attached to the 188th Engineering Unit (Vertical) at Wahpeton. One day he went downtown on his lunch break and bought a house outright and informed his wife later. The unit was mobilizing to deploy from Fort Lewis, Washington to Vietnam. Luckily, the order was called off. When not teaching summer school, Ralph had duty at Camp Grafton or other Guard bivouac locations. Local Guardsmen recall that Ralph was the oldest 4-mile runner and always the first one back in camp.

He was a lifelong athlete who enjoyed downhill skiing, cross-country skiing, figure skating, distance running, canoeing, bow-hunting (hiking, climbing trees, nature-watching, mushroom-hunting) and team sports. He loved the game of tennis and challenging many younger partners. He was a fixture of local league sports including basketball, volleyball, and softball. Ralph ran everywhere all year round and at age 73 could run a mile with a pulse in the low 60s at the end.

Wahpeton Parks & Rec director wrote a tribute poem for “He Comes on Foot.” Wayne recalled he used to hear Ralph coming in early a.m. to the former armory (Community Center), with his cold basketball, even in the middle of winter -- thud, thud, thud. He would practice free throws from the top of the key. In his 80s he made 21 free throws in a row from the top of the key.

George described their individual abilities that made a winning team. “And then there was Ralph. He had the agility, intellect, and instinct for the game. He could do it all (excellent defense with good range, could dig out a low hit ball, solid setup man, and a strong spiker). Yes, he was also a strong, accurate server. In one game Ralph served 19 points in a row. Volleyball is quite typical of his sports ability. It wasn’t that he was unbeatable with his volleyball skills. It was that he excelled in playing the game. And that is what he did in other sports as well. He was a competitor and all-around athlete.”

Ralph was a prolific writer of poetry, memoir, letters and stories. He wrote a book of limericks about every town in North Dakota (even the ghost towns) and was a champion of poetry recital, holding his audience captive with memorized favorites such as “Invictus,” “The Destruction of Sennacherib,” “After Apple Picking,” and the Yukon poems of Robert Service. He was a great raconteur who could keep a listener glued for the end of a story. He taught himself to play piano so he could serenade his wife.  He always regarded her as the greatest, most beautiful, luckiest thing that ever happened to him. In December 2020 he played “Lara’s Theme” one more time.

He studied life science, botany, chemistry and history beyond college and had the naturalist gift. He was a friend of conservation and of great conversation. He loved flora and fauna, dogs but not cats. In his 80s he planted 200 pine seedlings in one Arbor Day at WIS shelterbelt. He was spotted taking a basket of lost ducklings down to Chahinkapa Park to be released into the pond for adoption. He was dubbed “Johnny Appleseed” for planting fruit trees in many towns where friends and family lived. He once acted in the Passion Play at Chahinkapa Park. May there be many more stories, trees, wild birds and wild asparagus flags because of Ralph.

Ralph was preceded in death by his mother, father, two brothers, second mother, and grandson. He is survived by a brother and by his wife and 7 children, 21 grandchildren and 11 great-grandchildren as well as numerous nieces and nephews.

Donations in his memory can be made to the Bagg Bonanza Farm, Chahinkapa Zoo, or plant a tree.

The family plans a Celebration of Life later in 2021.

To order memorial trees or send flowers to the family in memory of Ralph Erdrich, please visit our flower store.