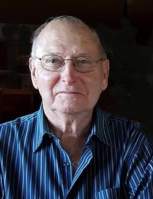 Ray Lee Trower was born June 13, 1939, to Sherman and Ella (Lotz) Trower in Sisseton, SD, where he also graduated high school.  After high school, he went to work for the local creamery where he was employed from 1957-1974.  While working at the creamery, he met Beverley Nelson.  They were united in marriage in 1965 at Grace Lutheran in Sisseton, SD.  In 1974, Ray, Beverley, and their children moved to Breckenridge, MN, and Ray began working for the Breckenridge School District where he was a custodian for 34 years, retiring in 2008.

In his spare time, Ray enjoyed tinkering with old cars and going to car shows.  Some of his prized projects were his 1957 Chevy 4-Door, 1963 Impala Hard Top, 1963 Impala Convertible, and his Army Jeep.  He also enjoyed making memories at the lake on the pontoon or fishing off the dock with his grandsons.  Ray was an avid woodworker as well.  His grandsons would get so excited to go chop wood with grandpa.  He also had a softer side for his granddaughter, whether it would be meeting her at the school bell in the mornings so she could go to the custodial office and have breakfast with him, or waiting at the corner for grandma to walk her home after school, where he would greet them with banana muffins.  He also had a special love for his dog, Gunner.  Ray also liked to play games, and would get everyone involved in a family game simply called “Turtle”.

He was preceded in death by his parents; and brother, Jerry Trower of Sisseton, SD.