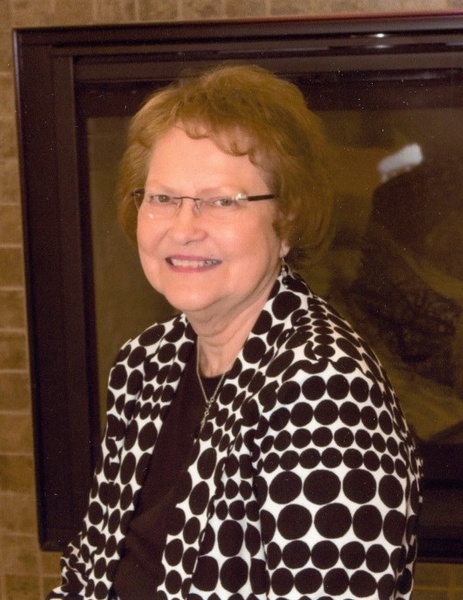 Rene’ Joan Moen was born on September 19, 1936 to Thomas and Myrtle Pederson. They lived on a small farm near Greenbush, MN. Music was treasured by the family and at an early age, Rene’ learned to play the piano from her dad. They even played a piano duet at a WDAY Talent Show and won the second prize! Rene’ graduated from Greenbush High School and then attended Concordia College in Moorhead where she earned her Bachelor of Science Degree.

Rene’s first year of teaching was in Breckenridge, MN where she taught second grade. She loved the children and was so happy that she was a teacher. During that year, Rene’ became engaged to Monroe Moen and they were married on June 7, 1957. The couple moved to Hallock, MN and Rene’ continued teaching second grade. Two years later their daughter Loni Jo was born and Rene’ treasured the memories of raising a daughter who had gotten her grandfather’s musical genes. Another two years and a little boy was born, Bradd Thomas, an active little fellow that every teacher should raise before she teaches first grade!

Rene’s family moved to Fergus Falls where she was hired to work as a reading teacher. She received special training in the field of learning disabilities, and with this new background, she taught first grade for many years.

A dramatic change in Rene’s career happened in 1972 when she was asked to develop the Academic Services Center at the North Dakota State College of Science in Wahpeton, ND. During her time at NDSCS, Rene’ received a Master of Science degree in Reading Education from Moorhead State University. She also served as an evaluator for the North Central Association, evaluating other two-year colleges. A number of state and regional awards were given to Rene’ throughout her years of service at NDSCS. Most appreciated by her were the 1997 Educator of the Year Award given by the North Dakota Vocational Educational Association and the Director Emerita Award given by NDSCS in 2009.

In 1992, Rene’ was initiated into Chapter J of the PEO in Wahpeton. The members of this group became wonderful friends and offered great support during difficult times.

In retirement, Rene’ traveled to several countries. In 1996, she was invited to join an Eisenhower Educator’s trip to South Africa. She also visited Norway, Germany, Austria, Switzerland, and India.

Rene’ will be remembered by this: “perhaps the greatest blessing in my life is being able to recognize how often I have been blessed”.

Rene’ is preceded in death by her parents, Myrtle and Thomas; her husband, Monroe; and her sister, Annette.

A Memorial Service will be held on Sunday, April 22, 2018 at 2:00 with visitation from 1:00 - 2:00 at Breckenridge Lutheran Church, Breckenridge, MN. Please share memorials with North Dakota State College of Science Foundation in memory of Rene’ Moen. René's Memorial Folder
To order memorial trees or send flowers to the family in memory of Rene' Moen, please visit our flower store.