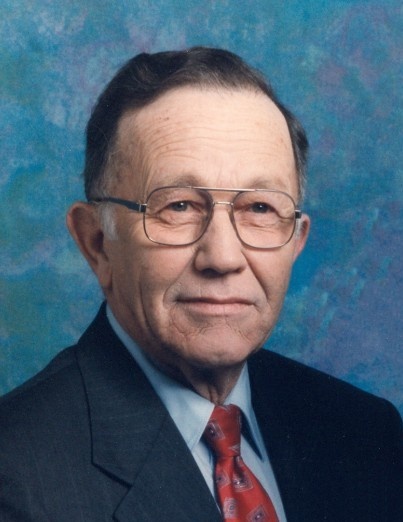 Rex W. Branson, 91, of Breckenridge, MN, formerly of Fairmount, ND, passed away on Monday, July 8, 2019, at CHI St. Francis Home in Breckenridge, MN.  Visitation will be Thursday, July 11, 2019 from 5:00 pm to 7:00 pm with a prayer service at 7:00 pm at Vertin-Munson Funeral Home in Wahpeton. Visitation will continue on Friday, July 12, from 9:00 am to 10:00 am followed by the funeral service at 10:00 am, at First English Lutheran Church in Fairmount, ND, with Rev. Larry Schmidt officiating. Burial will be in the Fairmount Cemetery.  Arrangements have been entrusted to Vertin-Munson Funeral Home.

Rex was born on April 21, 1928, to Roy and Lillian (Thompson) Branson near Fairmount, ND.  He grew up in rural Fairmount, he attended elementary school and graduated from Fairmount High School. He continued his education in Agriculture at Ellendale College, and later he began working on the family farm.  He was united in marriage to Fern Bellin on December 16, 1951 at Immanuel Lutheran Church in Hankinson, ND. They lived on the family farm, raising their three sons, until they retired in 1988.  Rex and Fern wintered in Texas and Missouri, where they enjoyed visiting with friends and talking about farming.

Over the years Rex served on the Fairmount Township Board, Fairmount School Board, Fairmount Cemetery Board and was an active member of First English Lutheran Church.  Rex enjoyed his years of farming, traveling, and spending time with his family and friends at Lake Elsie.

Fern passed away in July of 2013 after a 13-year struggle with Alzheimer’s, through which Rex was her daily caregiver.  The only thing that kept him from seeing Fern daily during her 9 years at St. Francis Nursing home, was a snowstorm.

He is preceded in death by his wife, Fern; an infant son, Paul in 1956; parents, Roy and Lillian; his brother, Neal Branson; and two sisters, Helen Reeser and Clara Branson. Rex's Memorial Folder
To order memorial trees or send flowers to the family in memory of Rex Branson, please visit our flower store.