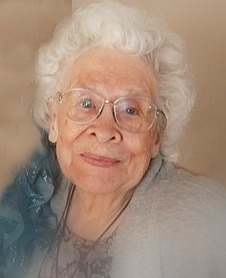 After decades of telling her children to "keep looking up and trust 'til you bust," Rita Elizabeth Ethier (Labine) has gone home to the Father. She was 92 years old and died peacefully in her sleep at Pioneer Senior Cottages in Breckenridge, Minnesota. She has gone home to join her mother, her father, her ten brothers and sisters. She fought the good fight and no longer needs to look up.

Rita was born on October 31, 1924, in the small farming community of Argyle, MN. She loathed sharing her birthday with ghosts and goblins, but the kids all loved trick-or-treating at Grandma's!

She finished high school at the age of 16, and went straight on to business college in Minneapolis, MN, graduating in May of 1941. At 22, she married her handsome Marine and World War II veteran, George, and at 26 they began their family (after several anxious years of trying). She poured out her life for her children and grandchildren—always giving, always asking what was needed next—and her many gifts included baking, sewing and being a first class baby-whisperer.

Rita was a worker bee. She loved and needed to stay busy! She worked in retail for many years, and later at a Wahpeton Group Home. It was never just a job to Rita; she had a servant's heart and did endless volunteer work at hospitals and retirement homes.

One of Rita's proudest moments was when she became a deacon's wife on January 29, 1980. A professed Lay Carmelite, she loved the Catholic Church with all her heart, and had a great devotion to Our Lord, Mother Mary, and all the saints, especially Padre Pio and Brother André.

"I've never been scared of death," she once said. "I've read the last page and know how the story ends."

Visitation will be on Sunday, April 30, at St. John's Catholic Church, 115 2nd St N, Wahpeton, ND 58075, from 3:00 to 6:00 p.m., with a prayer service beginning at 5:00. A Christian Mothers rosary will be held at 10:00 am, followed by the funeral Mass at 11:00 a.m. on Monday, May 1, at St. John's Catholic Church with Father Dale Lagodinski officiating. Burial will be at Calvary Cemetery, Wahpeton. Arrangements are entrusted to Vertin-Munson Funeral Home, Wahpeton.

To order memorial trees or send flowers to the family in memory of Rita Ethier, please visit our flower store.