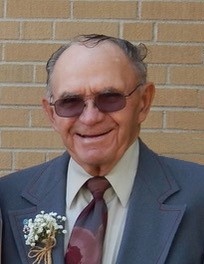 Robert Smith, 88, of Wahpeton, ND, passed away on Saturday, June 27, 2020 at St. Catherine's Living Center in Wahpeton.  Visitation will be held on Tuesday, June 30, 2020 from 5:30 PM to 7:00 PM, followed by a prayer service at 7:00 PM at the United Church of Christ in Wahpeton.  Due to Covid-19, please use the south door of the church, and exit through the front doors.  The prayer service will be held outside the front of the church.  Visitation will continue at the church on Wednesday, July 1, 2020 from 9:00 AM to 10:00 AM, followed by a public graveside funeral service at 10:00 AM at Fairview Cemetery. A live stream of Robert's service will be available on our website. Burial will be at Fairview Memorial Gardens, Wahpeton. In lieu of flowers, donations can be made to CHI Health at Home Hospice or St. Catherine’s Living Center.  Arrangements are entrusted to Vertin-Munson Funeral Home.

Robert Anthony Smith was born on March 19, 1932, the second child to Tony and Helen (Stewlow) Smith in Breckenridge, MN.  Growing up, Robert lived on several farms near Mooreton, ND, Dwight, ND, and Wahpeton.  He attended school at Mooreton #1 and then began helping out on the family farm.  Robert was drafted into the U.S. Army at the age of 21 where he trained as a telephone lineman and drove staff car.  After his honorable discharge, he returned to Wahpeton to continue helping his family on the farm.

On November 19, 1957, Robert was united in marriage to Harriet Janet Crogan, and they were blessed with four children, Virginia Ann, Darryl Lee, Carol Jean, and James Anthony.  He and his family continued to farm, raise livestock, sell eggs, and also found a little time for fishing.  After a long illness, Harriet passed away on April 19, 1974.

Robert later met Mary Gill and they were married on January 13, 1979, the coldest day of the entire winter.  The couple continued to live in the Wahpeton area and continued to farm.  Robert and Mary purchased a lake cabin on Deer Lake, MN, where they enjoyed spending time with their families, fishing, and pontoon tours on the fourth of July.  Robert retired from farming in 1995, but continued to be a handyman by helping with painting, plumbing, electrical work, and still helped out with chores.

Robert was a member of the United Church of Christ where he stayed busy volunteering and helping out with pancake feeds.  He enjoyed fishing, hunting, trips to the casino, family vacations, and pitching in at the Eagle’s fish fries.  But, what he loved the most was the time spent with all of his family and following each one in all of their activities.

He was preceded in death by his parents, Tony and Helen Smith; his first wife, Harriet Smith; his brother, Lester (Lois) Smith; his granddaughter, Abbey Smith; and a step son-in-law, Jerry Bakken.

To order memorial trees or send flowers to the family in memory of Robert Smith, please visit our flower store.