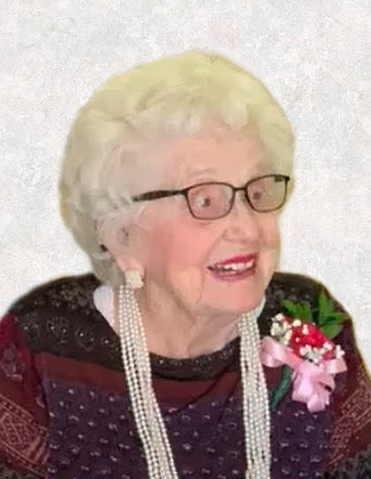 “I have loved you with an everlasting love” Jeremiah 31: 3

Ruth Inez Lies, 103, of Wahpeton, ND passed away Sunday April 4, 2021 in the care of St. Catherine’s Living Center, Wahpeton. Visitation will be held at St. John’s Catholic Church on Friday, April 9, 2021 from 11:30 am to 1:00 pm, followed by her funeral mass at 1:00 pm. Father Dale Lagodinski will officiate the service. A livestream of her service will be available on the funeral home’s website. Ruth’s body has been bequeathed to the University of North Dakota Medical School in Grand Forks, ND. Her cremated remains will be interred at a later date next to her husband, Jim, at the North Dakota Veteran’s Cemetery in Mandan, ND. Arrangements have been entrusted to Vertin-Munson Funeral Home of Wahpeton, ND.

Ruth was born on May 8, 1917 to Inga and Peter Lura in Barlow, ND. She attended her elementary grades in a little one-room school and grew up enjoying rural life, good friends, pets, and sunsets. After graduating from Carrington High School, Ruth worked at the JC Penney store in Carrington. She met James Lies, and the young couple enjoyed dancing together to the big band sound at the Rainbow Gardens. She and James were married on January 27, 1941 and lived in Fargo, ND one year before Jim entered military service. Ruth was very proud to be an officer’s wife; she joined him at the bases in Cheyenne, WY, and Muskogee, OK, where their oldest son was born. After Jim’s return from the service in 1946 the two lived in Fargo, ND, Rapid City, SD, and Mitchell, SD, before moving to New Rockford in 1950. In 1992, Jim and Ruth settled into Wahpeton to stay. They celebrated 70 years together on January 27, 2011 before Jim’s passing on June 11, 2011.

Ruth was a member of the Altar Society, Minerva Literary Club, Homemakers, Bridge clubs, and the American Legion Auxiliary. She enjoyed playing bridge, golf, and dancing. Her greatest joy was her husband, Jim, and family. Her family and friends hold her memory dear, including her kindness, generosity, and many talents such as sewing and cooking. Her beautiful and selfless spirit touched so many and will live on.

She is preceded in death by her husband, Jim; her parents; two brothers; two sisters; and one great-granddaughter.

In lieu of flowers, donations can be made to St. Catherine’s Living Center, Wahpeton. Ruth's Memorial Folder
To order memorial trees or send flowers to the family in memory of Ruth Lies, please visit our flower store.