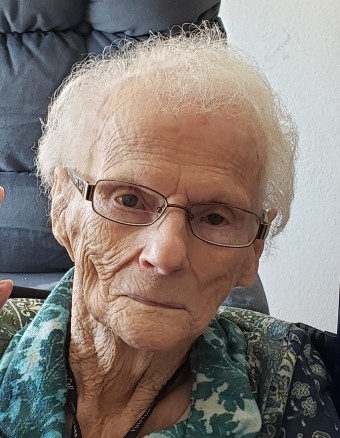 Ruth P. Stoltenow, 93, of Breckenridge, MN, formerly Great Bend, ND, passed away on Friday, June 28, 2019 at Twin Town Villa in Breckenridge.  Visitation will be held on Tuesday, July 2, 2019 from 1:00 PM to 2:00 PM, followed by her funeral service at 2:00 PM at Trinity Lutheran Church in Great Bend.  Rev. Sean Daenzer will officiate the service.  Burial will be at Fairview Memorial Gardens, Wahpeton.

Ruth Phyllis Keenan was born on February 4, 1926 in Rural Richland County, to George and Jessie (McCullum) Keenan.  She grew up and attended school in Wyndmere, ND.  On June 24, 1943, Ruth married Gilbert Stoltenow at Trinity Lutheran Church.  The couple later moved to Great Bend, ND and then to Wahpeton, ND in 1974.  Ruth was a fulltime housewife, but in later years, she and Gilbert both worked at North Dakota State School of Science until their retirement.  Gilbert passed away on February 23, 2008.

Ruth was a very devoted wife, mother and grandmother.  Her life was fulfilled with the love of God and spending time with her family and grandchildren.  She enjoyed gardening, cooking, sewing and spending weekends at the lake. Ruth's Memorial Folder
To order memorial trees or send flowers to the family in memory of Ruth Stoltenow, please visit our flower store.