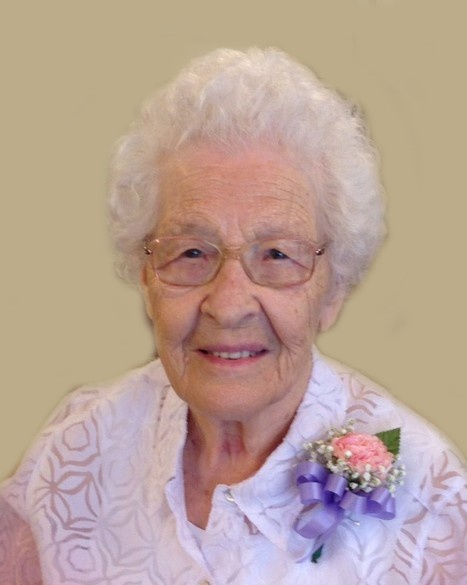 Ruth L. Twedt, 100, Wahpeton, ND, passed away Friday, July 7, at CHI St. Francis Healthcare Center, Breckenridge, MN. The Funeral Service will be at 2:00 pm on Tuesday, July 11, at Bethel Lutheran Church with Rev. Jim Gustafson officiating. Visitation will be Monday, 5 PM to 7 PM with a 7 PM Prayer Service at Vertin-Munson Funeral Home, Wahpeton and one hour before the service at the church on Tuesday. Interment will be at Fairview Memorial Gardens. Arrangements have been entrusted to Vertin-Munson Funeral Home.

Ruth Lillian Twedt was born July 2, 1917 in Fargo, ND to Melvin and Thora (Trana) Simmons. She was baptized August 5, 1917 at Norman Lutheran Church, Kindred and confirmed July 19, 1931 at Christiania Lutheran Church. She graduated from Kindred High School in 1934 where she played basketball, ran track, and played in the high school band. She was united in marriage to Clarence Twedt on November 19, 1937. The couple lived in rural Kindred raising their two girls. In 1954 the family moved to Wahpeton where Ruth worked for Ben Franklin for 25 years. Clarence passed away December 29, 1972, Ruth continued to live at her home until moving to the 4th Avenue Manor in 2002 and to Sienna Court in 2013. She entered St. Francis Nursing Home in August of 2016.

Ruth was a member of Bethel Lutheran Church where she was very active in ladies aid, women’s circle, and quilting.

She was preceded in death by her parents, Melvin and Thora, her husband, Clarence, and her brother, Thomas Simmons.