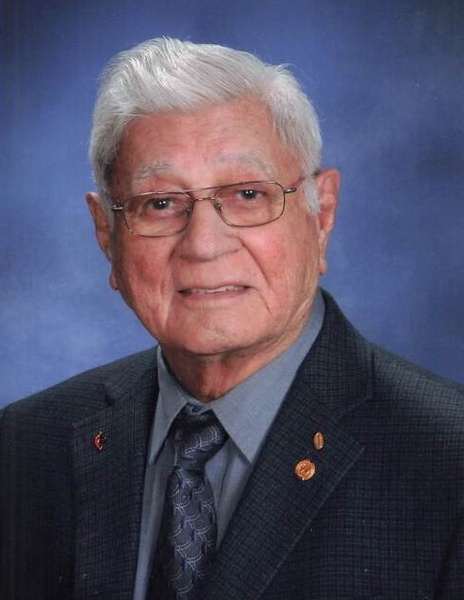 Sampson M. “Sam” Hill, 92, Wahpeton, ND, passed away on Sunday, March 28, 2021, at the Leach Home in Wahpeton.  Visitation will be on Wednesday, March 31, 2021, from 5 pm - 7 pm followed by a prayer service at Vertin-Munson Funeral Home in Wahpeton.   Visitation will continue on Thursday, April 1, 2021, from 10 am - 11 am followed by his funeral service at Evergreen United Methodist Church in Wahpeton.  Rev. Mary Ann Bernard will officiate the service. Burial will be in Fairview Memorial Gardens. A live stream of the service will be available on the funeral home website. Arrangements have been entrusted to Vertin-Munson Funeral Home.

Sampson Martin Hill was born on April 13, 1928, to Lucas and Eliza (Plume) Hill in Veblen, SD. He lived on the family farm and attended a Catholic Mission School in Stephan, SD. He was orphaned at age eight and the following year was sent to the Circle of Nations boarding school, formerly known as the Wahpeton Indian School. He was separated from his siblings for many years but over time they all reunited at school as either students or faculty. Sam stayed there until the 9th grade.

In 1945, Sam enlisted in the US Army and was sent to Fort Crook which was a prisoner of war camp for Italian prisoners at the time. Two years later, he was honorably discharged and returned to Wahpeton. He worked for a trucking company and then B.J. Williams Roofing Co., where he met his lifelong friend Len Marquardt. Len introduced Sam to the love of his life, Jean Jones in 1952.

On April 20, 1954, Jean and Sam were united in marriage in Webster, SD. Together they raised four daughters in Wahpeton. In 1962, Sam went to work for the Wahpeton Indian School and trained to be a boiler operator. He worked there for almost 40 years before retiring in 1990, for the first time. Six years later he returned to work part-time at the school doing maintenance on the heating systems while also working at various places. After his second retirement, Sam and Jean spent the summers at their lake cabin on West Lost Lake, MN, that he built. Sam also spent his time with the Wahpeton American Legion Post 20 and was a longtime member of Evergreen United Methodist Church. He served as a board member for Fairview Cemetery for many years as well. Sam enjoyed hunting, fishing, beadwork, making peace pipes, attending church, and spending time with his grandchildren and great-grandchildren.

He is preceded in death by his wife and best friend of 61 years, Jean Hill; parents Lucas and Eliza Hill; brothers, Solon Hill, Ben Hill, and Solomon Hill; and sisters, Margaret Hendrickson and Hazel Hill.