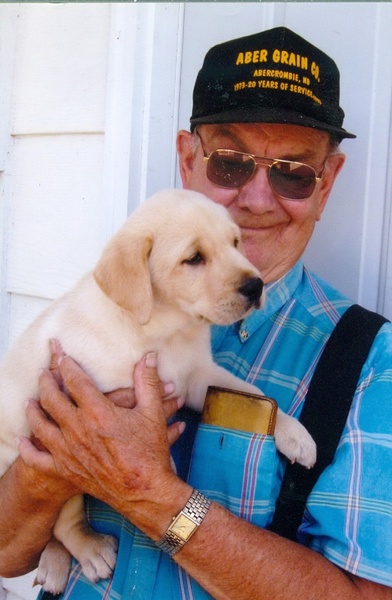 Selmer “Sammy” Lodahl, 87, of Wahpeton, ND passed away on Thursday, August 3, 2017 at CHI St. Francis Healthcare, Breckenridge, MN. Visitation will be from 1-2 PM, followed by his funeral service at 2 PM at St. John’s Lutheran Church on the corner of County Road 81 and 71st St. SE, rural Galchutt, ND on Tuesday, August 8, 2017. Rev. Thomas Reagan will officiate. Burial will be at St. John’s Lutheran Cemetery, rural Galchutt, followed by a time of lunch and fellowship at the Abercrombie Community Center, Abercrombie, ND. Arrangements are entrusted to Vertin-Munson Funeral Home, Wahpeton.

Selmer Lodahl was born on May 18, 1930 to Oscar and Marit (Haarstad) Lodahl near Abercrombie, ND. He grew up on the family farm near Abercrombie attending the Abercrombie Public School and later graduating from Abercrombie High School. After high school, Sammy stayed at home to work on the farm while his two older brothers, Norman and Norton, served in the US Army. When Norman returned from the service he purchased a jeep, and that became one of Sammy’s favorite pastimes. The three brothers continued to make their home on the farm.

Sammy was very proud of his roots. One of the highlights in Sammy’s life was a trip to Norway to see his relatives. He also looked forward to when the Norwegian tour groups would come to the area so he could translate for everyone.

Sammy was a member of St. John’s Lutheran Church, and was one of the three remaining members when the church closed its doors. He always enjoyed attending the Gunness family reunions, having meals with neighbors, and having his birthday parties at the Abercrombie Community Center. Sammy looked forward to his nightly routine where Roger Quamme would pick him up and they would drive into the Fryn’ Pan in Wahpeton to have supper with Stenny and other Fryn’ Pan friends. He also enjoyed the company of his dog and cat, Shep and Charlie, and would spoil them every day with Lucky Charms, ham, bologna, and any leftovers he might have. In his spare time, you could find Sammy in one of his farm sheds working on his old one-bottom plow or one of his old tractors.

Sammy is survived by many cousins, friends and neighbors. He was preceded in death by his parents, Oscar and Marit, his brothers, Norton and Norman, and his little sister, Norma.

In lieu of flowers, memorials are preferred to be donated to an organization of your choice.