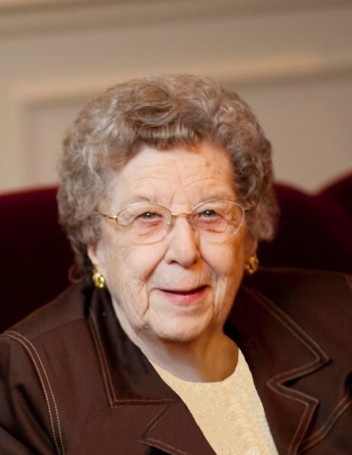 Sue Miller, 91 of Wahpeton, ND, passed away on Sunday, August 18, 2019 at her home. Visitation will be Thursday, August 22, 2019 from 5:00 pm to 7:00 pm, with a prayer service at 7:00 pm at Vertin-Munson Funeral Home in Wahpeton.  Visitation will continue on Friday, August 23, from 9:30 am to 10:30 am followed by the funeral service at 10:30 am at Evergreen United Methodist Church in Wahpeton. Pastor Jen Tyler will officiate the service.  Arrangements have been entrusted to Vertin-Munson Funeral Home.

Beverly Sue Branson was born on April 16, 1928 to Thad and Sylvia (Andrews) Branson on the family farm south of Fairmount, ND.  She grew up on the farm with her sister, Jane, and attended school in Fairmount.  After graduating, she and Jane attended Interstate Business College in Fargo.

On October 14, 1950, Sue was united in marriage to Robert Miller at the United Methodist Church in Fairmount.  Together they started their farm south of Wahpeton.  Sue was actively involved in the farming operation. Robert passed away on August 15, 2003. Sue continued to work on the farm with her sons until the summer of 2019.

She was preceded in death by her husband, Robert; her parents, Thad and Sylvia Branson; her father and mother-in-law, Harry and Leora Miller, and her brothers-in-law, Ivan Miller and Donald Miller. Sue's Memorial Folder
To order memorial trees or send flowers to the family in memory of Sue Miller, please visit our flower store.