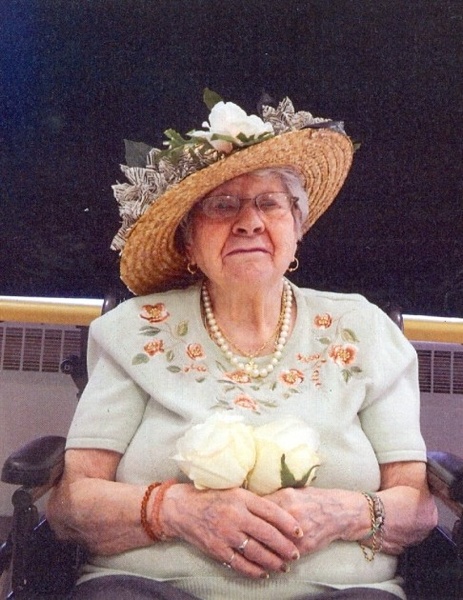 Theresa Ann Braun Thompson, age 96, passed away early Thursday, September 10, 2020 at St. Catherine's Living Center, Wahpeton, ND, where she had resided for the past four years. A Mass of Christian Burial will be held Wednesday, September 16, 2020, 11 a.m. at St. John's Catholic Church, with a visitation one-hour prior. Father Dale Lagodinski will officiate. Burial will follow in Calvary Cemetery, Wahpeton.

Theresa was born August 24, 1924, in Breckenridge, MN to William and Dorothy (Carr) Braun.  She was born. raised and lived her life in the area. She married Iry Thompson and together they raised three children, Gregory, Thomas and Theresa.

She enjoyed growing flowers and plants, knitting and making crafts.  She made, "the best pies you'd ever eat in your life."  Her specialties were pumpkin and apple. She served the community as a Boy Scout leader, volunteered at St. John's Catholic Church as a lay reader, sold Avon and was a member of the American Legion and Veteran's of Foreign Wars and the Eagle's Club.

She was preceded in death by her spouse, Iry; two infant sons, Kevin and Kyle; her parents, William and Dorothy; a son, Gregory Thompson; brothers, Evan and Matt Braun, and a sister, Betty Nelson.  She is survived by her son, Thomas (Diana) Thompson, of Puyallup, WA; a daughter, Theresa (Brad) Jacobs, of New England, ND; grandchildren, Thomas, Amy, Jeremy, Derrick, Bryant, and Marissa, as well as 16 great-grandchildren and one great-great grandchild. She is also survived by a brother, Thomas Braun of Sacramento, CA.

In lieu of flowers, the family is requesting memorials be sent to the Benedictine Living Community of Wahpeton Foundation, 1307 Seventh St. N, Wahpeton, ND 58075.

Those with COVID concerns may view the service below beginning at 11 a.m., Wednesday,

where condolences may also be left. Theresa's Memorial Folder
To order memorial trees or send flowers to the family in memory of Theresa Thompson, please visit our flower store.