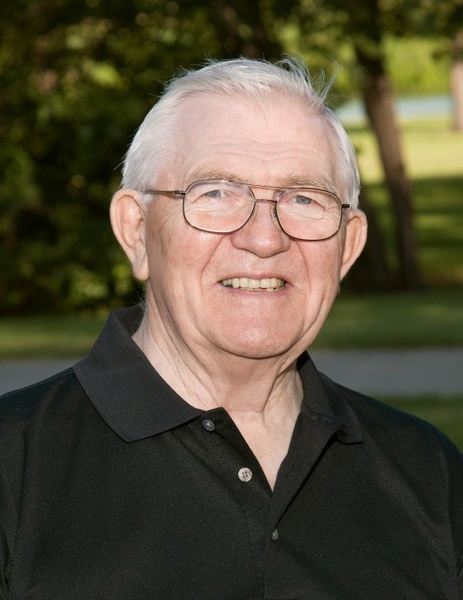 Treadwell “Tready” Leslie Haugen, 85, Fargo and formerly of Wyndmere, North Dakota passed away Tuesday, September 25 at Elim Nursing Home, Fargo, ND from complications of Parkinson’s disease. Visitation will be Friday, September 28, from 5:00PM -7:00PM with a prayer service at 7:00PM at Wyndmere Lutheran Church, Wyndmere ND. Funeral services will be Saturday, September 29, at 11:00AM with a 10:00AM visitation also at Wyndmere Lutheran Church, with Tready’s nephew, Doug Haugen, officiating. Burial will be following the funeral at Gol Aal Cemetery, rural Wyndmere.

Tready was born May 31, 1933 to Oscar and Hannah (Mitskog) Haugen in rural Garborg Township, Wyndmere, ND. He attended Garborg #3 Rural School and graduated from Wyndmere High School in 1951. People often asked him about his unusual name. His “ma” found his name in the Sear’s catalog, for Treadwell Tires.

Tready was baptized and confirmed at Gol Aal Lutheran Church, rural Wyndmere. He was a Sunday School teacher in his earlier years and later served on the church council. He was also a long time officer of the Gol Aal Cemetery Association.

In his youth, Tready was active in sports, including baseball, football and basketball. He also liked getting into a bit of harmless mischief with his friends when he was boarding in Wyndmere to attend high school. He later told stories that a few can confirm or deny.

Tready graduated from Wahpeton Science School in 1954, where he studied Heating Ventilating and Air Conditioning (HVAC). While at Science School, he lettered in baseball and football and was named to the All Conference team in football.

He started his own HVAC business, Tready’s Heating, which he owned and operated for over 50 years. He also enjoyed farming, raising sunflowers, corn and cattle in his earlier years. His Norwegian family heritage was important to him, and he owned the family farm that was homesteaded in 1887 by his grandparents, Iver and Margit Haugen. He built his forever home there with his wife, Alice (Klepetka), whom he married in 1962.

Tready became interested in local, state and national politics when he started his business and served three terms as a state representative in the North Dakota legislature, from 1960-1966. At the time, he was the youngest serving state legislator. He continued to follow current events and always believed in helping others throughout his life, whether it was through church’s outreach, or having a spare part available in his shop for a neighbor that might just fit for the time being. Tready was also always available for customers and the community. There were many holidays and weekends where he would take a furnace call at midnight to make sure a home had heat in the middle of winter.

Tready’s other civic activities include being a charter member of the North Dakota State Advisory Council for Vocational Education, where he served for 13 years, serving as a member for both the Lake Agassiz Regional Council and Advisory Committee for Job Service of North Dakota, past director of the Wyndmere Fire Department, township officer and member of the Wyndmere Community Club. Tready received the Distinguished Service Award at the 1991 Crop Show.

Ultimately, Tready loved his God, his family and his country, in the large sense and as well as small as the country roads where he grew up. One of his favorite things to do was being in his shop and driving Garborg Township in the summers to look at crops and visit neighbors. He was known for being a big man with a gentle heart and quiet strength of character. He will be greatly missed by his survivors, Alice (Klepetka), his wife of 56 years; daughters Tara Larson (Michael), of Drayton, North Dakota, and Trista Haugen, of Ashburn, Virginia; granddaughters, Jalyn, Laiken, Easton and Peyton Larson; sister, Loris Kyle; in-laws, Verona Haugen, Adolph and Marianne Klepetka, Beverly Klepetka, Marcie Wahl, Ernie and Dixie Klepetka, Diane Klepetka; and many nieces and nephews.

He was preceded in death by his parents, and his brothers, Irving Haugen and Harold Haugen.