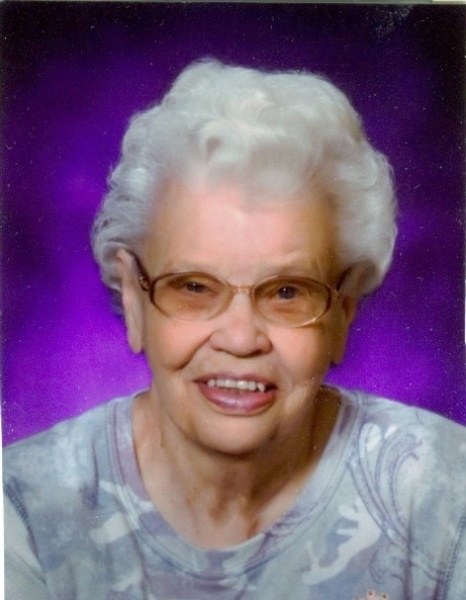 Valeria “Tootie” King, 93, of Breckenridge, MN, formerly of Wahpeton, ND, passed away on Thursday, July 11, 2019 at Twin Town Villa in Breckenridge.  Visitation will be held on Monday, July 15, 2019 from 5:00 PM to 7:00 PM, with a prayer service at 5:30 PM at Vertin-Munson Funeral Home in Wahpeton.  Visitation will continue on Tuesday, July 16, 2019 from 10:00 AM to 11:00 AM, with a Christian Mothers/Foresters Rosary at 10:00 AM, followed by her Funeral Mass at 11:00 AM at St. John’s Catholic Church, Wahpeton.  Burial will be at Calvary Cemetery, Wahpeton.  Arrangements are entrusted to Vertin-Munson Funeral Home.

Tootie was born December 4, 1925, to Melvin and Anna (Connally) Olson in Breckenridge, MN.    She was baptized into her faith at St. John’s Catholic Church, where she was the longest living member of the church.  She attended St. John’s Catholic School, K-8th grade and graduated from Wahpeton High School in 1943.  She attended NDSSS for one year and then began working at Olson Jewelers for her father.

She was united in marriage to Norman King on November 17, 1947 at St. John’s Catholic Church in Wahpeton.  Norm was stationed in Guam where Tootie joined him for one year before returning to the U.S. on December 7, 1948.  When Norm returned from Guam, the couple made their home at the Naval Base in Port Hueneme, CA.  After Norm’s discharge they moved to Wahpeton where they raised their family.  Norman passed away on July 24, 1994.

Tootie’s family was most important to her, she loved spending time with her children, grandchildren and great-grandchildren. It was always a pleasure for Tootie to host the 4th of July and Christmas Eve festivities. She liked doing word puzzles, reading and watching Jeopardy and Wheel of Fortune.

She is preceded in death by her husband, Norman; son, Mark; her parents, Melvin and Anna; three brothers, Willie, Jack and Wally; and her sister, Mary.