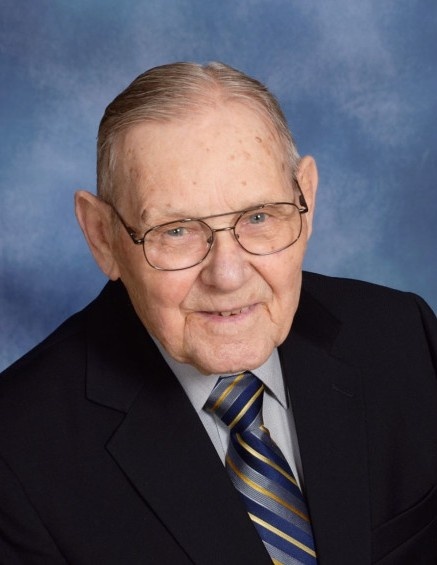 Verlin Lundgren, 97, of Wahpeton, ND, passed away on Friday, February 22, 2019 at Sheyenne Crossings in West Fargo, ND.  Visitation will be held on Tuesday, February 26, 2019 from 6:00 pm to 8:00 pm, followed by a prayer service at 8:00 pm at Vertin-Munson Funeral Home, Wahpeton.  Visitation will continue on Wednesday, February 27, 2019 from 10:00 am to 11:00 am, followed by his funeral service at 11:00 am at Immanuel Lutheran Church, Wahpeton, with Rev. Matthew Tooman officiating.  Burial will be held at Fairview Memorial Gardens at a later date.  Arrangements have been entrusted to Vertin-Munson Funeral Home, Wahpeton.

Verlin Lundgren was born on May 7, 1921 to William and LoElla (Hoppenstedt) Lundgren in Gaylord, Minnesota. He was baptized into the Lutheran faith in LaFayette, Minnesota and confirmed at St. Paul’s Lutheran Church in Gaylord. He was raised and educated in Gaylord, graduating from high school there in 1939. Verlin later attended Dunwoody Industrial Institute in Minneapolis, Minnesota, graduating from the Electrical program in 1941.

Verlin was united in marriage to Erna Ann Doerr of Brownton, Minnesota on July 5, 1941. They made their home in Minneapolis where Verlin was an electrical technician for the DW Onan Company until he joined the U.S. Army in March of 1944. He served in an Army Signal Corps unit installing fixed radio communications equipment for the Army Air Corps in the European Theater of Operations.  Verlin was discharged in July of 1946 as a Staff Sergeant.  He and Erna returned to work in Minnesota until 1949 when they started their own electrical contracting, appliance, and bottled gas business in Frederic, Wisconsin.  In 1954 they moved to Wahpeton when Verlin joined the ND State College of Science staff as an instructor in the Electrical program.  He later served as Chairperson of the Electrical Department until his retirement from the college in 1984.

Verlin was a licensed master electrician in North Dakota and Minnesota, was a full member of the Institute of Electrical and Electronic Engineers serving through the chairs of the Red River Valley Section, and was the Executive Secretary of the North Dakota Electrical Contractors Association for 25 years. He was a member of Immanuel Lutheran Church, Wahpeton, and held offices on the church council.  He had lifetime memberships in the Veterans of Foreign Wars, American Legion, and 40 et 8 organizations in Wahpeton.  Verlin had a life-long love of band music, playing the trumpet in his hometown band at Gaylord, Dunwoody Institute Band, Atlanta Army Ordnance Depot Band, Wahpeton Elks Jolly Corks, and the local community band.  He was honored to have played the bugle for many years for Memorial Day and Veteran’s Day ceremonies and funerals of veterans in the different communities in which he lived.  Verlin also enjoyed fishing, golfing, riding his motorcycle, traveling with Erna, and reminiscing.

Verlin was blessed to have shared 71 years of marriage to Erna before her passing in 2013.  He is survived by his sons, Warren, Hibbing MN, and Glenn (Andrea) Aurora, IL; daughter, Lynn (Scott) Rerick, Ashley, ND; nine grandchildren: Scott, Kimberly, Sarah, Debra, Shelly, Michael, Mark, Jeffrey, and Elizabeth; and nineteen great-grandchildren.

He was preceded in death by his parents; wife, Erna; granddaughter, Amanda Lundgren; and a great-grandson, Ryan Lundgren. Verlin's Memorial Folder
To order memorial trees or send flowers to the family in memory of Verlin Lundgren, please visit our flower store.