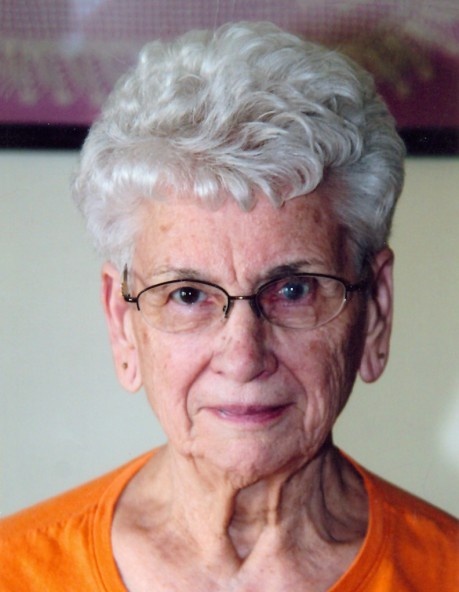 Virginia J. Langendorfer, 94, of Wahpeton, ND, passed away Wednesday, February 20, 2019 at St. Catherine’s Living Center, Wahpeton, under the care of CHI Health at Home Hospice. A Memorial Mass will be held on Saturday, April 27, 2019 at 2:00 pm with visitation and a Christian Mother’s Rosary beginning at 1:00 pm at St. John’s Catholic Church, Wahpeton.  Fr. Dale Lagodinski will officiate.  The family wishes that memorials be made to Chahinkapa Park and St. Catherine’s Living Center.  Arrangements have been entrusted to Vertin-Munson Funeral Home, Wahpeton, ND.

Virginia J. Langendorfer was born May 8, 1924 in rural Mantador, ND, to Frederick and Gladys (Woiwode) Schmitz.  She grew up and attended school in Mantador.

On August 5, 1945 she was united in marriage to Wendell Langendorfer in Alexandria, Louisiana.  Wendell passed away December 14, 2009; they were married for 64 years.

Virginia worked for NDSCS in the Food Services Department for several years.  After retirement and not being one to sit around, she began working for Doug and Mary Campbell at Four Season Plant Center; the memories made there are brought up frequently. She then began working at Loopy’s Dollar Store in Breckenridge, MN, where she took great pride in helping customers in their annual greenhouse each year.  After Loopy’s closed and because of her passion for gardening and growing flowers, she began working at Ace Hardware in their greenhouse, always knowing how to water the plants with special care.  While working all these jobs, she still found time to help Wendell with his sideline catering and cooking jobs, where they made lasting friendships and satisfied their appetites.

Finally, into her eighties, Virginia decided to slow down and relax a bit.  Spirituality was always a big part of Virginia’s life.  She was a member of St. John’s Catholic Church and the Ladies Circle.  She was a life long member of the Wahpeton VFW Auxiliary and was very active in the group up until the time she could no longer drive. Virginia's Memorial Folder
To order memorial trees or send flowers to the family in memory of Virginia Langendorfer, please visit our flower store.