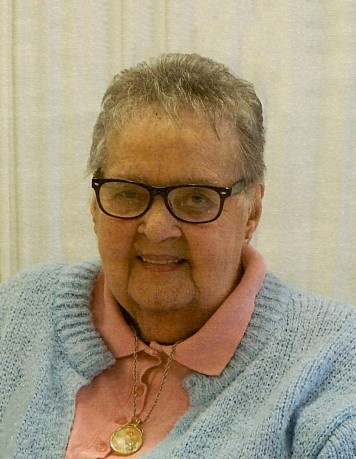 Virginia “Jean” M. Biewer, 87, of Wahpeton, ND, passed away on Friday, October 18, 2019, at St. Catherine’s Living Center in Wahpeton, under the care of CHI Health at Home Hospice.  Visitation will be on Monday, October 21, 2019 from 5:00 pm to 7:00 pm with a prayer service at 7:00 pm at Vertin-Munson Funeral Home in Wahpeton.  Visitation will continue on Tuesday, October 22, 2019 from 9:30 am to 10:30 am, with Christian Mother’s Rosary beginning at 9:30 am, followed by her Mass of Christian burial 10:30 am. at St. John’s Catholic Church in Wahpeton.  Fr. Tony Welle will officiate the service.  Burial will be in Calvary Cemetery, Lidgerwood, ND.  Arrangements have been entrusted to Vertin-Munson Funeral Home.

Virginia Mae Mattson was born on March 18, 1932 to Magnus and Mary (Gaukler) Mattson in Lidgerwood, ND.  She grew up and attended school in Lidgerwood through the 9th grade.  On September 1, 1948 she married Charles Biewer, they lived in several towns in the Upper Midwest before moving to Lidgerwood in 1955, where they began farming.  Jean worked for Dakota Quilt Factory from 1977-1987, and then began cooking at Dakota Estate until 1994.  Jean began caring for Charles when his health failed and then moved to Wahpeton in 1997, when Charles became a resident of St. Francis Nursing Home in Breckenridge.

Jean was a fantastic cook, and loved to bake, play cards, shake dice, fish and try her luck at Dakota Magic Casino. She also loved to play games with her grandchildren.  She was a foster grandparent at Head Start, being honored with many awards.

She was a member and belonged to Christian Mothers at St. Boniface Church in Lidgerwood.  Jean loved her large family and was very proud to tell people about each one of them.

She is preceded in death by her husband, Charles; her parents; grandparents; great-grandson, Corey Biewer; and her brother, Arnold (Arliene) Mattson.

The family would like to give a special thank you to the staff of St. Catherine’s Living Center for the excellent care that Jean received.