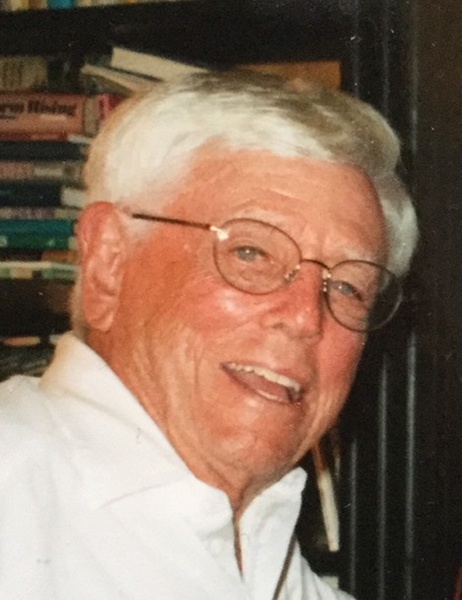 William [Bill] Burdick Richardson, 100, passed away on March 31, 2019 at Eventide in Fargo, ND. A Celebration of Life will be held on Saturday, April 6, 2019 from 2:00 pm to 4:00 pm at the Eventide Centrum in Fargo. Arrangements are entrusted to Vertin-Munson Funeral Home, Wahpeton, ND.

Bill was born in Washington, D.C. on September 25, 1918 to Burdick N. and Julie H. Richardson. He grew up in Davenport, Iowa where he was a member of Davenport Boy Scouts Troop 3 from 1930-1933 and Sea Scout Ship 5001 from 1933-1935.  During Bill’s High School years he took up flying and obtained the rare Amateur Pilot’s License followed by a Private, Limited Commercial and full Commercial Pilot’s license.

Bill graduated from the University of Iowa with a major in Economics in 1942 after which he attended instrument flying school at Des Plaines, Illinois, receiving an instrument flying rating. He taught instrument flying in Grand Rapids, Michigan under an Army Air Corps contract until 1944.  “I spent two years in the air,” he said of his days teaching.  Bill’s first plane was a Piper Cub but his favorite was his second plane, the Culver Cadet, designed by Al Mooney as one of the first private planes with retractable gear.  That very plane is now at the Planes of Fame Museum in Chino, California.

In 1942 Bill met Adelyn Dering at Green Lake, WI and they married in 1944. An opportunity to manage farmland in the Dakotas emerged in 1945 and lured Bill to Wahpeton.  In 1946 Bill and Addie’s first son Nelson was born, followed by Katherine “Kiki” in 1948, twins Tom and Rane in 1949, Joe in 1951 and Nancy in 1953. The family moved from Wahpeton to Solvang, California in 1956 and then to Santa Barbara in 1959. Bill continued managing farmland, commuting between California and Wahpeton. During summers the family returned from California to their cabin on Blanche Lake.  The family finally settled back in Wahpeton in 1962.

In the mid-1950s Bill along with Tom Manikowski, Joe Kurak, Fred Fox and UND Geologist Donald Towse formed a company prospecting for uranium in Wyoming and the Dakotas. They flew over interesting geological formations with a scintillometer on their plane to detect the presence and intensity of uranium deposits. They staked a number of claims, some of which, in Wyoming, were aggressively disputed by armed competing prospecting parties. Fun, but only mildly profitable.

In the late 1970s, Bill became one of the owners of Wil-Rich Manufacturing in Wahpeton, ND. Wil-Rich became a pioneer in developing minimum-till tools and airseeders. Wil-Rich was sold to Lear Siegler in 1982.

Bill was a member of Northwest Farm Managers Association in the 50s, 60s and 70s. He helped establish the North Dakota Chapter of the American Society of Farm Managers and Rural Appraisers in 1964, becoming their President in 1967.  Bill was a member of Flying Farmers of North Dakota and the Agassiz Club for several years. Bill served on boards of directors for Wil-Rich Manufacturing, Ro-Banks Tool & Die, and Beauregard Land & Timber Co.

Among the recognition and awards Bill received were the Daniel C. Beard Life Saving

Award in 1935; Combat Medal Men’s Association Award in 1936; NDSCS Parade Grand Marshal in 1972; Boy Scouts Silver Beaver in 1976; and Wahpeton Chamber of Commerce  Outstanding Citizen of the Year in 1980. He also received the Eagle’s Hometown Builders Award and was named North Dakota State College of Science Wildcat of the Year in 1987.

For most of Bill’s life he was engaged in racing and sailing boats in Green Lake, Wisconsin and later, Ottertail and Blanche Lakes in Minnesota. He won many trophies.

Bill had a lifelong interest in canons. Newspaper accounts of mysterious discharges of historic canons barking from the shores of the Mississippi were likely referring to Bill’s youthful doings.

Memorials may be made to the Boy Scouts or a charity of one’s choosing. The family would like to extend special thanks to the caring staff of Eventide Fargo.